Weeks 1-3by MimickerThe first thing Cialdini talked about was the influence high status people have on others. He mentioned an experiment where they had a guy speak to classes on the existence of life in outer space. In one set of classes, they told the students the guy was the head professor of physics at Harvard University (someone of high status). And the other set of classes they told the class this guy was a janitor at their school, and just studied outer space in his free time (low status). Despite the fact that they had the same guy give the speeches, and gave both sets of classes the same exact speech, with the same tonality and everything… in the classes where they were told this guy was an expert… 75% of the students afterwards said they believed in life in outer space. And in the classes where they were told he was a janitor, afterwards only 30% said they believed in life in outer space. So, people are more willing to believe people who they THINK are an authority, or high status… than someone of low status… REGARDLESS of the actual information they present. Cialdini at some point asked the question “Why are we (humans) so social?” I won’t go over the answers, because it’s not relevant, but there is one interesting thing he mentioned about this question… He explained that even though he asked the question “Why are we so social?,” social psychologists wouldn’t approach the question this way. Social psychologists don’t ask “why?” as a first question. They would rephrase the question to “What factors increase and decrease our desire to be social?” Then once they found the factors after EXPERIMENTING, they would at the end ask “why is it this way?” But asking “why?” as your first question is ineffective without any evidence to examine. (When he said this, I thought of people KeyboardJockey’ing before they have any field experience to speak from.) There is a psychological term called the “Old Look in Perception.” The “Old Look in Perception” states that what we see before us in reality, and what we perceive it as, is the same thing. In other words, there is a 1:1 ratio between what we see before our eyes, and what we see it as. However, then came the “New Look in Perception.” And that states that what we see, and what we perceive it is, is not the same thing. This has replaced the old look perspective. “The New Look Perspective” states that what we see before our eyes, and what we perceive it as, are completely different things. Our perception is altered by our internal states, past experiences, and other factors. Here is an important phrase to remember: “We often see what we expect to see, not what is really there.” When we expect for something to become true, and it does (because we are expecting it), it is called a “self-fulfilling prophecy.” And most of the time we do receive exactly what we are expecting to receive. Cialdini gave an example of this: Say you walk into a room expecting the people in there to be hostile. No matter what the people say, you will perceive it as you expect it to be. You will misinterpret comments in a certain way, and your perception will cause it to be true. You get exactly what you expect. Then Cialdini mentioned an experiment which gave evidence toward the “New Look Perspective.” It was done by Bruner & Postman. At a teacher conference of around 350, they gave out essays to all the teachers to grade. One-third of the teachers were told the student who wrote the essay had an above average IQ. One-third were told the student had an average IQ. And one-third were told the student had a below average IQ. The result was, the teachers told the student had an above average IQ, gave the essay a significantly higher grade. So, the higher the IQ the teacher THOUGHT the student had, the higher the grade they gave the student… even though they were the EXACT SAME essay. They believed the essay was going to be better (because the student was smarter), and they got what they expected. So again, remember this, “We often see what we expect to see, not what is really there.” I’ll leave it up to you to relate all this to pick-up, but if you really can’t see how it does, just ask. -Mike MimickerLive Pickup Videos This article was originally posted on FastSeduction.com. You may find more articles by Mimicker in the Archive Search or the Poster Zip Archives. 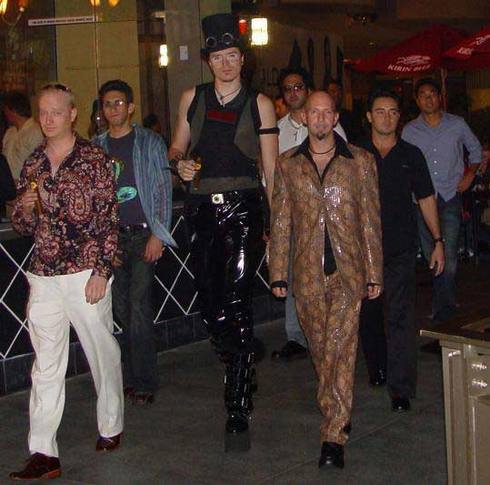